​FITNESS CHALLENGE
International Women's Day March 8, 2020 - Grandparents' Day September 13, 2020
A fundraising event in support of the
Stephen Lewis Foundation's
​Grandmothers to Grandmothers Campaign
DONATE
This is a fundraising event in support of African grandmothers caring for children orphaned by AIDS. The Grandmothers to Grandmothers Campaign is made up of thousands of grandmothers and grandothers across Canada and is now taking hold in Australia, the UK and the US.
Supporters of the Grandmothers Campaign stand in solidarity with African grandmothers who bury their own beloved children and begin to parent again with few resources. Funds raised through the campaign support vital services and programmes -- grief counseling, training for income-generation, support to pay for school fees and supplies -- and amazingly the funds we raise support much more than service delivery.  African women remain on the frontlines of the AIDS pandemic as agents of change, leaders and experts in what it takes to rebuild their communities.  They are working valiantly to fight stigma, raise awareness, and demand their human rights.
Since the Stephen Lewis Foundation launched the Campaign in 2006, the collaboration and determination of grandmothers groups has raised $33 million in support of African grandmothers and the grassroots, community-based organizations that support them. 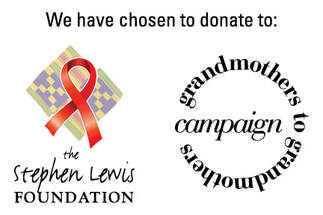